Years back I mentioned that the network and associated components do have quite an impact on your audio performance.
Meanwhile this became common knowledge in - let's call it - audiophile minded circles.

As usual, I prefer reasonably (priced) highest performance solutions.
Usually a healthy mix of DIY efforts and commercial stuff gets me there.

Today I'd like to introduce my "currently" preferred "audio" streaming network solution. 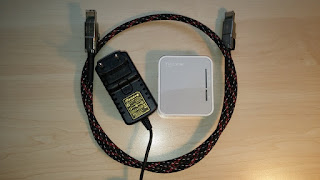 Now. What do we have here?

* a TP-Link WR902AC - AC750 router working as a wireless client,
basically establishing a wireless bridge to my home router
* a high quality iFi iPower 5V power supply
* a hand made (by me) ethernet cable


1. The router
I've chosen this TP-Link router because it's small, runs low power
and runs at 5V.
The wireless performance is sufficient for the purpose.
It's pretty up2date on its networking features and technology.
Most important, it can run as wireless client.
The community feedback was quite OK too.
Setting it up properly was not the most straight forward part though.
But -- as soon you're making it into the config menu, you'll manage.

2. The power
As usual, I'm using iFi iPower. IMO one of the best supplies out there.
(I don't even see a chance to get the cost down by going the DIY route.)
(No. I don't even see a chance to get the performance up by using linear supplies either.
I tried it by applying several linear supplies))
It's again 5V. I love it.
Powering a network device with a quality supply can make a difference!
I'd recommend to give it a try.
I used the mirco USB adapter, which comes with the iFi.
(While you're at it - you might even try to power your home main router properly!)

NOTE: Most prefabricated cables are type B cables! (defined by the plug-wiring!)
You need to figure out how your network is currently configured.
Then make sure you buy the right plug! ( e.g. Telegaertner J00026A2001 - type B)

The Telegaertners are very well made. They come with printed circuits boards
as line termination inside the plugs.
It is said this builds a high quality termination with proper impedance,
especially when compared to EL-Cheapo connectors. Just to underline it - the cable plays a big role in the game!

I think it's well worth the effort.

What do I achieve with above?

Some audio companies would call it  - RePower-ReClock-ReGenerate
and would charge you an arm and a leg for it.

The network is a noisy and highly dynamic beast.

Most of that stuff can make it into your DAC/streamer, messing with its performance.
...even with the isolation transformers build-in into the ethernet jacks!

There are numerous approaches on the market. I don't want to dig into
every possible option. I tried several approaches though.

I used to run a well powered Cisco GB ethernet hub in front of my PI3 streamer.
This setup has been much better then using a straight cable.
Beside that, it allowed me to run also video streams over that very same network.
All the other clients attached to the same network were causing even worse groundloops
- by e.g. the attached TV cable network - though.

Onboard Wifi, on e.g. PI3 interferes from several angles. That for sure is another NoGo solution from my side.

Glas. Fibre is a nice isolator. Bandwidth is high. But you've got two endpoints to be taken care of and it's much more expensive. I do not feel tempted to go for that solution either.

That's why I ended up with above. I now have the WLAN away from my music source,
I have a rather clean power supply and a nice and quite short customized cable.
And the price/performance ratio is IMO more than fair.

If you have sufficient WLAN coverage, you might have a look at above approach.

From my perspective: Project goal - achieved!

In the 2nd post about this networking subject, you can read on about how I improved the RPI3 ethernet port.

PS: If you're interested in testing such a DIY ethernet cable - PM me.

Thx folks, for dropping by.
This project is mainly about sharing a way to squeeze the most out of home audio computers, software and networking. You'll find hands-on advice and a few little tools to make your life easier on your way to accomplish a great audio setup all done by yourself.
I hope your precious time won't get wasted.
Enjoy.